Mike Vaccaro’s name was added to the Jandoli School Wall of Distinguished Graduates Thursday, an overdue honor that brought many people who spoke about him to tears.

“I have a theory — the terms journalist and writer aren’t synonyms,” said ESPN’s Chris LaPlaca, ’79, himself an honoree on the wall. “A journalist educates you. They might also entertain once in a while, but they primarily educate. A writer takes you places you’ve never been, they move your emotions in ways you don’t even understand completely.

“It’s rare when you can find someone who can do both, educate and entertain. It’s so rare. When you find that person, you’ve found a gem. Mike Vaccaro is a gem. … But Mike is also awesome with a capital A as a human being. He’s one of the finest people on the planet.”

st. Bonaventure University’s Hellinger Award winner from the Class of 1989, Vaccaro is a three-time New York State Sportswriter of the Year. He’s been the lead sports columnist for the New York Post since 2002, a job he said he knew he wanted when he was 8 years old.

“When Aaron brought this up at a faculty meeting a few months ago, that he wanted to put Mike’s name on the Wall of Fame, the overwhelming reaction of faculty in the room was, ‘He’s not up there already?'” said Dr. Brian Moritz, ’99, director of SBU’s graduate programs in Sports and Digital Journalism. “That’s a testament to everything Mike’s done in his career and the impact he’s had on this school.”

Before joining the New York Post, he worked as a columnist and reporter at the Newark Star-Ledger, Kansas City Star, Middletown Times Herald-Record and Olean Times Herald. He was also the sports editor for the Northwest Arkansas Times. 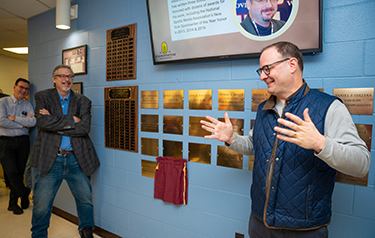 Several alumni surprised Vaccaro with their appearance at the unveiling of his plaque on the Wall of Fame in the Murphy Building, including ESPN’s Adrian “Woj” Wojnarowski, ’91, Amy Wojnarowski, ’92, and Tim Bontemps, ’07.

“Mike changed my life when I was a freshman,” said Bontemps, his head bowed to fight back tears. On the advice of faculty member Pat Vecchio, Bontemps emailed Vaccaro for advice, nevering to hear back from a man so accomplished in his expect field.

Within three hours, Bontemps received a two-page email from Vaccaro, telling him to send him his work and to reach out to him for whenever he’d like. Vaccaro ultimately helped Bontemps get an interview at the New York Post, where he worked for eight years.

“Outside of my immediate family, there is no one who’s had a bigger impact on my life than Mike,” said Bontemps, who covers the NBA for ESPN. “I have the job I always dreamed of having because he showed a lot of faith in me.”

Woj said his friend of more than 30 years has a special place in Bonaventure lore.

Vaccaro has won more than 50 writing awards and authored two sports history books: “Emperors and Idiots: The Hundred Year Rivalry between the Yankees and Red Sox, From the Very Beginning to the End of the Curse” and “1941: The Greatest Year in Sports.”

“If Woj is the best sports reporter to ever come out of Bonaventure, Mike is the best sports writer. I don’t think anyone could ever question that,” said Tom Missel, chief communications officer at SBU and a friend since they covered the Bonnies for the Olean Times Herald (Missel) and The BV school newspaper (Vaccaro) in the late 1980s.

Vaccaro has served for years on the Jandoli School’s Alumni Advisory Board and Dick Joyce Symposium committee and is this year’s keynote speaker Friday at SBU’s annual Communications Day for high school students in the region.

“For all the wonderful alums we have on this wall, there is no one who cares more about this place than Mike Vaccaro,” said Aaron Chimbel, dean of the Jandoli School.

Vaccaro was humbled by the honor.

“Early in my sophomore year, Dr. Jandoli took me into his office and told me, ‘You know, Michael, to whom much is given, much is expected,'” Vaccaro said. “That’s pretty much informed everything I’ve done, not only in terms of how much I love this university, but how much I love this (Jandoli) school.”

About the University: The nation’s first Franciscan university, St. Bonaventure University is a community committed to transforming the lives of our students inside and outside the classroom, inspiring in them a lifelong commitment to service and citizenship. st. Bonaventure was named the #5 regional university value in the North in US News and World Report’s 2022 college rankings edition.