Shaban is from Deir ez-Zor which is the largest city in eastern Syria and the seventh largest in the country.

“I was really young when I came here, so the transition was really easy,” she said.

Shaaban will graduate in the spring and will join Mar next fall on the presidential scholarship to pursue her dream of becoming a dentist.

The graduate plans to attend Lamar in her undergraduate program and apply to the University of Texas for her graduation.

She said that she remained a dentist, which cemented her love for the profession.

Significant also participates in a long list of extracurricular activities, while maintaining her salutatorian status with a 4.0 GPA.

“I always try to leave time to get everything done,” she said. “I don’t try to procrastinate at all. I make time for everything. I try to finish all my chores at school, so I can do all my clubs… I try to keep myself occupied.”

During her rare spare time, she has said that she loves to hang out with friends and family.

“I also love to bike and crochet,” she said. 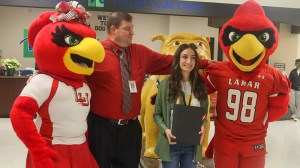 Hunter Fabion, a history teacher at Shaaban who is also an advisor to the Key Club, said Shaaban comes from a family that values ​​education and service.

“When Rima graduates, she will be left with incredibly big shoes to fill,” Fabione said of Shaaban. “She has had a lasting impact on our community. We will miss Rima Shaaban very much.”

Senior reads regularly to preschoolers at the Marion and Ed Hughes Public Library as part of their weekly reading program.

Shaaban also worked on the Texas show Adopt a Beach.

“Not a lot of people her age are willing to get up at 6 a.m. and work five hours collecting trash off Texas beaches on a Saturday morning,” Fabion said.