Previous Annual Conference hosted by the American Association of Colleges and Universities (AAC&U)Many higher education associations are preparing to hold annual meetings in the next few days, weeks, and months. As Omicron continues to spread rapidly, association leaders say they keep the health of attendees first in mind, whether their conference is virtual, in-person or co-ed.

Don Michelle Whitehead, Vice President of the Office of Global Citizenship on Campus, Community and Jobs at the American Association of Colleges and Universities (AAC&U), a global membership organization focused on undergraduate liberal education.

On Wednesday, AAC&U will begin its annual four-day meeting after last fall’s selection to present a personal and virtual component. Attendees will join in person at events in Washington, D.C., and will be required to show proof of vaccination and wear masks indoors. Public sessions and some simultaneous sessions will be broadcast live to both virtual and in-person registrants. All conference participants will be able to view session recordings after the conference.

“I think people waited a little bit later than usual to register for the conference, especially those with a personal dimension, because people were watching to see what was going on,” Whitehead said. “As people get a better sense of what’s going on, we’ve seen more people make a decision about virtual attendance or in-person attendance.”

Whitehead noted that AAC&U also allowed members to switch from personal to virtual at the last minute. In-person conference attendees can also access the virtual platform if they decide not to join sessions or if they report symptoms of COVID-19 and can no longer be there in person.

“This week, I’ve heard some people say things like, ‘I have a young child, they haven’t been vaccinated, so I’m not comfortable coming in in person,'” Whitehead said. “So we’ve seen people take advantage of these changes so they can still be involved.”

But not all associations have the resources to offer a mixed conference.

“We knew early on that we didn’t have the staff to do a hybrid trial well,” CIC President Dr. Marjorie Haas said of choosing to go in person. “Then, with Omicron going forward, we needed to review our plans, so we spoke with our medical advisors and with the board of directors to come to a decision that we would all be involved.”

Citizenship and Immigration Canada (CIC) has decided to have an on-site medical clinic with COVID-19 testing. The warm weather in Florida will allow attendees to gather safely outside for meals, too. They offered a lenient cancellation policy additionally due to Omicron’s rapidly changing status. Attendance is down about 20% this year, although Haas said that “was better than I expected”.

Of the nearly 700 participants, at least two reported symptoms of COVID-19 at the conference, according to Haas. She noted that participants provided mostly positive feedback after the event. Several organizations have been in contact with CIC for advice as they plan to hold their own in-person conferences.

“If you are really going to be all in and personal, you have to trust that your attendees will sign up for your security programme,” Haas said of the advice she gave. “If you had the feeling that there would be a grudging commitment to the safety program, it wouldn’t do it for you. We knew we would have attendees who would stick to the spirit and letter of the health plan. That trust in our group let’s go ahead with it.”

Dr. Karen A. Stott, President and CEO of Achieving a Dream (ATD), a professional and advocacy organization dedicated to community colleges, emphasized that there is no one-size-fits-all approach because every organization weighs such conference planning choices. 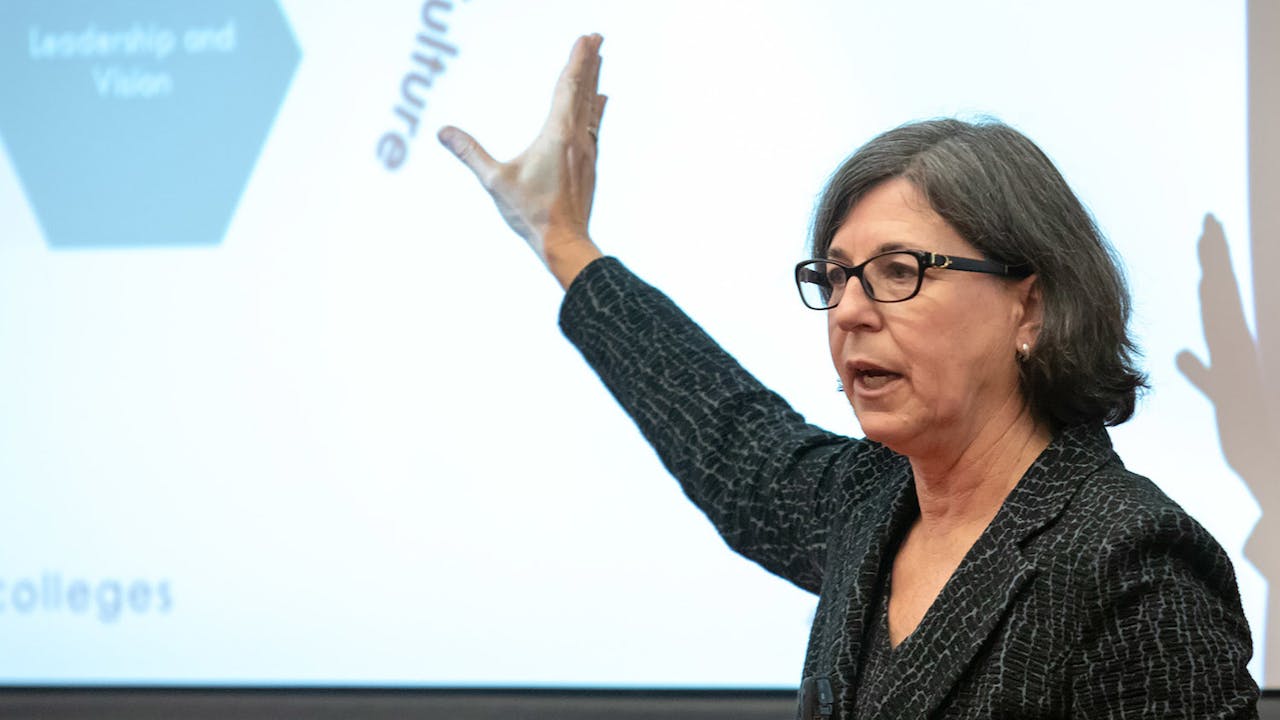 “We all have different audiences and different considerations,” Stout said. “So, I would say that first because these decisions are difficult for each of us to make.”

From February 14-17, ATD’s annual conference called DREAM will be entirely virtual. ADT made the decision to go virtual months before Omicron came out. After its virtual conference last year, ATD asked college presidents and their ATD teams what they were comfortable with the following year. Largely due to the increased delta variable at the time, many major audiences of DREAM have expressed concerns about in-person gathering.

“We found that faculty and student professionals were more interested in travel than perhaps other groups,” Stout said of the feedback they received. “In addition, there have been a number of institutions or countries that have COVID-19 travel advisory policies, which means that not all institutions will have the same access. Being an equity organization, this is also of concern to us.”

Similar to CIC, Stout added that ATD did not have the ability to hold a virtual and in-person conference “in an ideal way”. Without a hybrid option, she said, one central point influenced the call to become virtual.

“What has resulted is that we simply don’t want to ask the faculty and student affairs professionals who have been so essential in this work of student success, and people who are themselves parents, partners, and colleagues, to risk the health of the conference, no matter how much we believe the dream is,” Stout said. distinct. “In return, we also learned that if we ask them to travel, we also ask them to leave their students at a sensitive time as students are still experiencing a lot of disruption in the pandemic.”

Like Whitehead at AAC&U, Stout noted that the virtual conference will additionally allow ATD to reach more people who might not have been able to attend in person, due in part to the cost of travel. Some colleges have told ATD that they prefer virtualization because it can give more people on their campuses access to DREAM.

But Stout said she still looks forward to an in-person annual meeting, hopefully in 2023.

“I’ll tell you for sure: I don’t know how sustainable a virtual meeting will be just for us in the future,” she said. “Most of the peer learning that happens to us will be automatic in meetings, and it’s hard to replicate that in a virtual space.”

The difficulty of replicating a community in a virtual arena was a big reason why the American Council on Education (ACE), the nation’s largest higher education member organization, decided to hold its 2022 annual meeting in person from March 5-7 in San Diego, California. Attendees will be asked to provide proof of vaccination and to wear masks indoors.

“We committed to being face to face last year when we really saw how hungry it is to do some networking and relationship building that comes with bringing people together,” said Mushtaq Gonga, Senior Vice President and Chief of Staff. in ACE. “I feel like people are tired of Zoom. But we also wanted to be safe, so we made the decision early on about mandating vaccines.”

After a virtual conference last year, ACE surveyed participants and listened constantly to requests for a secure in-person meeting for the following year. ACE considered offering a hybrid conference, however Gunja said the organization was concerned it wouldn’t be able to do it well enough.

“There are organizations that have been able to have amazing mixed meetings, and I am in awe,” Gonga said. “But I think we were concerned about making sure everyone had the experience they wanted after what we saw in our survey.”

Looking ahead, Gunja noted that the meeting location in San Diego means the conference will not only operate under some of the state’s strictest regulations for COVID-19, but will also be in warmer weather for people to gather outdoors. the The timing in March also looks optimistic. Gonga said current data suggests that many states by then may have passed the peak omicron cases.

“But we are watching it closely,” he added.

Similar to ACE, the American Association of Community Colleges (AACC), an advocacy organization for community colleges, will host an annual in-person meeting from April 30 to May 3 in New York City.

“I cannot overstate the importance of connecting with each other in person,” said Dr. Martha Parham, AACC’s senior vice president of public relations. “Especially for community colleges, where we have seen low enrollment and so many challenges in this pandemic. Everyone has been dealing with this in isolation. Coming to this meeting to be with someone who is going through the same issues that you are can build solidarity.”

The AACC will follow state and federal regulations related to COVID-19. Since New York City has some of the strictest regulations in the country, Parham added that she hopes attendees can meet safely.

Still months away, November 2022 will mark the annual meeting of the Association for the Study of Higher Education (ASHE), a scholarly association for higher education scholars. The conference is scheduled to be mixed with the in-person component being held in Las Vegas, Nevada. Similar to its associate higher education institutions, ASHE will comply with federal and state COVID-19 safety guidelines for gatherings. Last November, the organization held a successful rally in San Juan, Puerto Rico.

“Like last year, we have to see what things look like as we get closer to November,” ASHE CEO Dr. Jason Gilbo said of whether the annual meeting will go fully virtual. “As we move forward, knowing that in-person conference can provide community and build networks while the virtual component can improve access, our question is how do we balance the two. Maybe a lot of people are involved in the long-term strategy discussion.”

For Whitehead, navigating conference planning with Omicron has only reaffirmed the sense of community in higher education: “If we learn anything about the pandemic, we have to be flexible and patient with each other as things change.”

Rebecca Kelliher can be reached at rkelliher@diverseeducation.com.