This story, originally published by Fermilab, is reprinted here with permission.

PIP-II, the state-of-the-art linear accelerator project at the US Department of Energy’s Fermi National Accelerator Laboratory, received some help this year from undergraduate engineering students at Northern Illinois University.

Every year, NIU’s Senior Design Program provides an opportunity for engineering students to apply the skills they have learned in class to address challenges in the real world. At the beginning of the first semester, students form small teams and are presented with more than 100 projects proposed by professors, research organizations, companies and even individuals. Student teams rank their favorite projects and are matched via a lottery system.

The clients then give their teams some basic guidance and requirements. But from there, the students work mostly independently, starting with iterative design, safety discussions and paperwork in the first semester and finally ordering materials and building their designs in the second. The fruits of their labors are displayed at the annual Senior Design Demonstration Day at NIU.

NIU students Caleb Denton, Perla Gaytan and Marcus Mims spent their year working for Kyle Kendziora, a linac installation engineer, on a portable low-particulate cleanroom to be used for the installation of the linear accelerator. 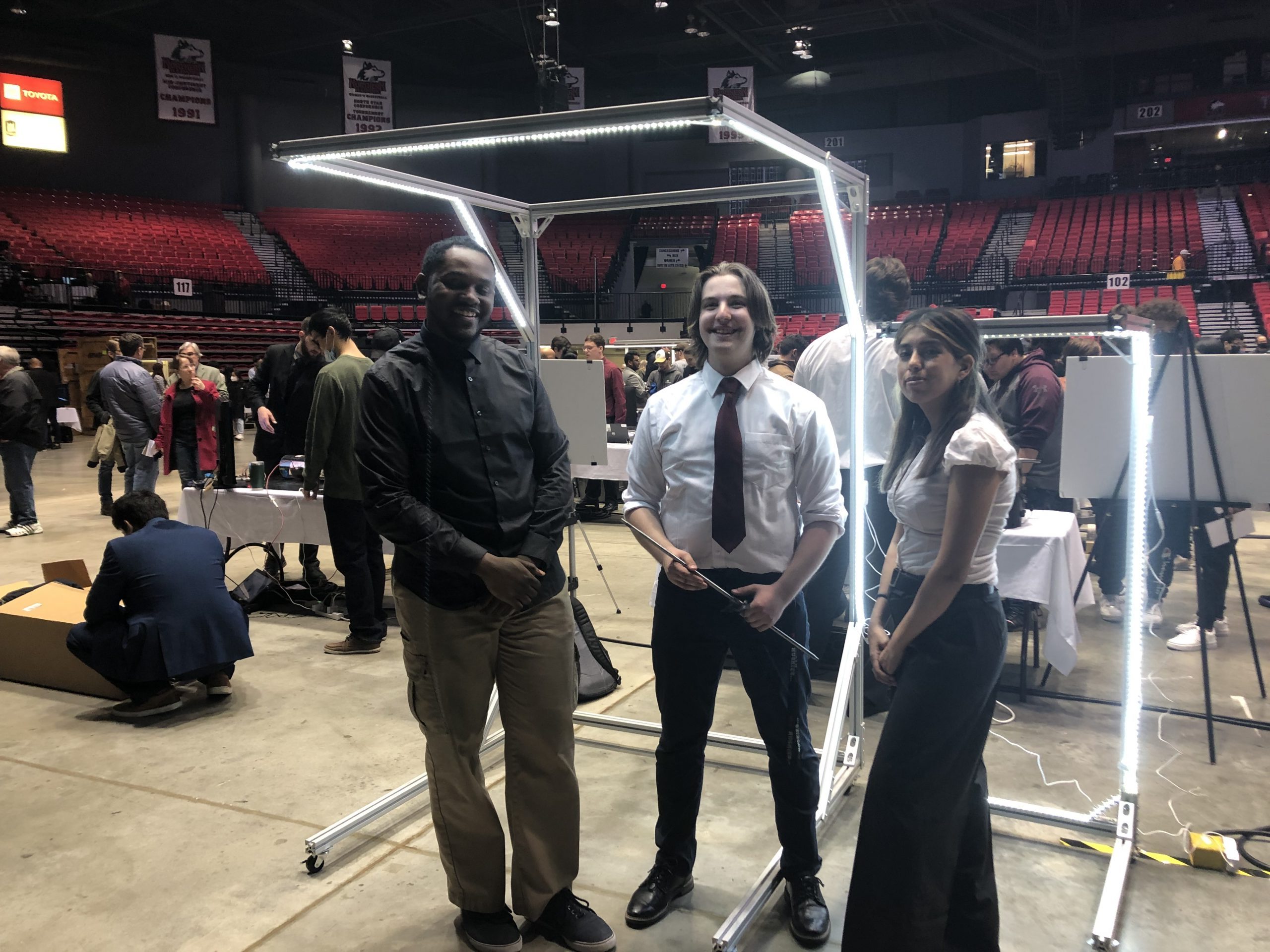 When the superconducting cryomodules are installed, they will have to be connected to each other in a cleanroom to prevent any dust and debris from migrating into the beam tube and contaminating it.

Kendziora said they have used various iterations and styles of portable cleanrooms in several experiments before, but the space limitations for PIP-II’s installation are an added challenge this time. “Previous [cleanrooms] straddle the beam line and would roll along it, and we don’t have that luxury with the PIP-II linac,” said Kendziora.

Every year, NIU’s Senior Design Program provides an opportunity for engineering students to apply the skills they have learned in class to address challenges in the real world.

To solve this, the student group designed a portable cleanroom that can slide in and be pulled away from the aisle side of the beam line without needing to be disassembled.

“For a senior design group with little-to-no experience in vacuum and accelerators and whatnot, they did a really good job,” said Kendziora. “The cleanrooms that the students built will get used for sure. They thought outside of the box a bit with the method of lighting it that I think will light up the work better than our previous portable cleanrooms.”

Mims, a mechanical engineering student, said he enjoyed working with Kendziora and having a chance to pick his brain and learn from a Fermilab engineer. “I definitely learned a lot,” said Mims. “It was something that every student needs to go through because it forces you to not just learn in the classroom but also apply what you learn to real applications.

“I actually enjoyed the process, and building it was the best part. … It takes a lot to build something that looks simple.”

The other PIP-II project was a mockup of the HB650 cryomodule that will be used in the PIP-II Injector Test facility, also known as PIP2IT, a testbed for PIP-II technologies. The high-beta 650 MHz (HB650) elliptical cavity crymodules will make up the final stage of the PIP-II linear accelerator; They accelerate the proton beam from roughly 500 MeV to its full energy of 800 MeV.

Curtis Baffes, a PIP-II installation engineer, commissioned the mockup so his team could prepare for installation before the actual cryomodules arrive at Fermilab. “Having something physical to work with allows you to have a much cleaner installation,” he said.

NIU students Caeden Keith, Svilen Batchkarov and Stefan Nyholm were matched with the cryomodule mockup project. Baffes began by showing them a CAD, or computer-aided design, model of the cryomodule they had to replicate. 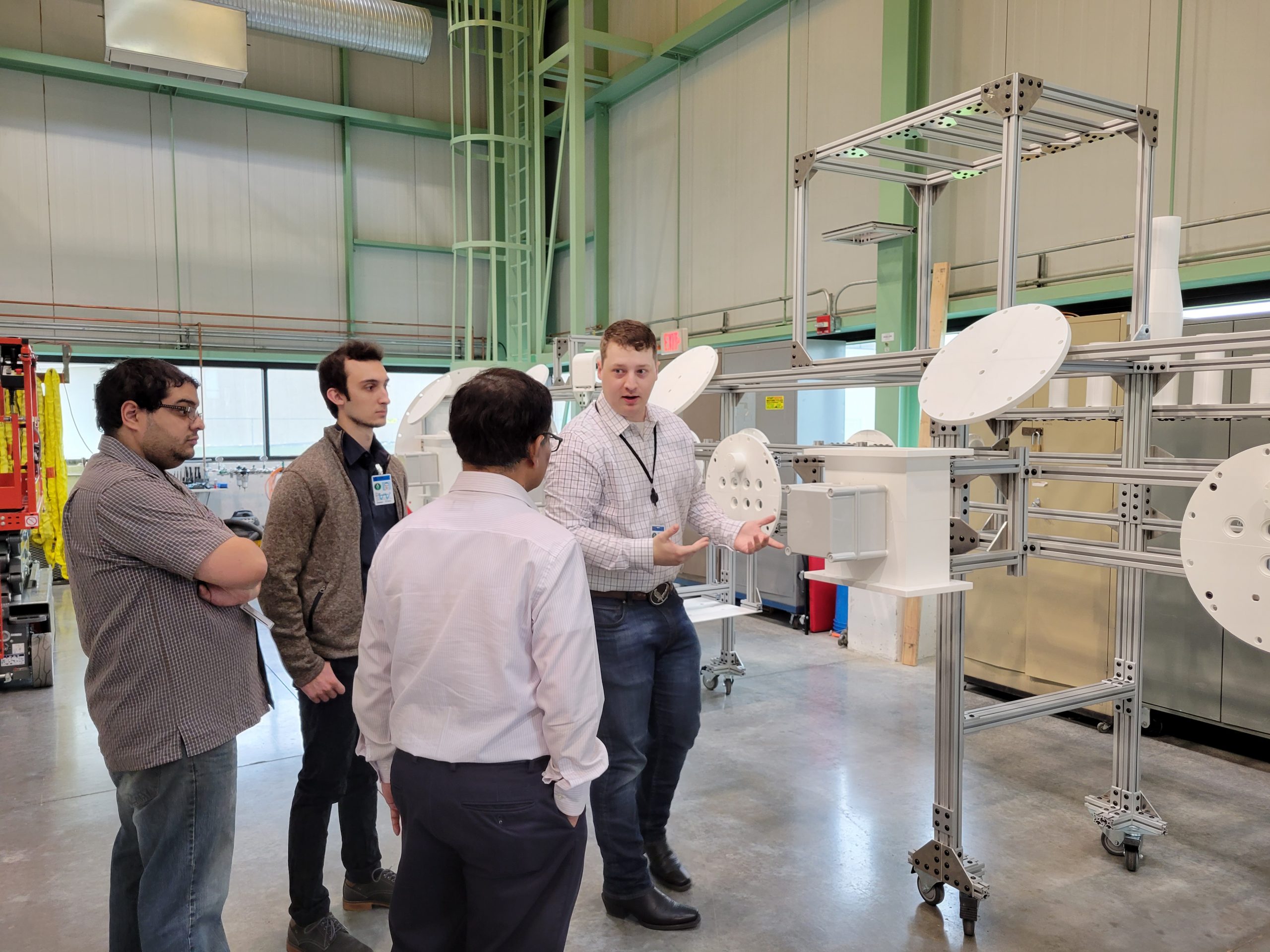 NIU engineering students (from left) Stefan Nyholm, Svilen Batchkarov and Caeden Keith explain their senior design project to their professor, Tariq Shamim (front, back turned) at Fermilab’s CMTF. The team built a full-scale mockup of PIP-II’s HB650 cryomodule that will be used for fit checking and preparing test stand and accelerator locations for the real cryomodule. Photo: Curtis Baffes, Fermilab

“Our first idea was trying to order a giant plastic tube, but we’re thinking there’s no way we’re going to get a 33-foot tube that will work out well,” said Nyholm, a mechatronics engineering student. “After that, a few other ideas came around and we thought to ourselves, Why do we need to have this as a tube?”

Thinking outside the tube led the group to decide on a modular solution made of an aluminum building system: metal framing that can be fastened together in various configurations, like an oversized erector set. The group 3D-printed accessories to represent the instrumentation ports on the outside of the cryomodule.

Baffes is excited by the mockup’s modularity; it represents the HB650 now but could be reconfigured in the future to match the interfaces of the LB650, SSR1 and SSR2 modules.

“The systems that were designed and built are great, and will find real-world application at Fermilab,” said Baffes. “We are already using the HB650 cryomodule mockup in the PIP2IT test stand for cable dressing. So this device has already been useful and will continue to be useful into the installation of the project.”

The students were also pleased with their final design. “It was a great sense of satisfaction and accomplishment to see the entire thing complete,” said Nyholm.

Keith, a mechatronics engineering student, said he was familiar with Fermilab from when he participated in Saturday Morning Physics. His favorite part of the senior design experience was the chance to contribute to PIP-II, “the next step in science.”

“When I did the Saturday Morning Physics program [at Fermilab], I got to learn ‘why does matter exist?’ and ‘how do we find particles?’ and ‘what is everything?’” he said. “So, being able to be a part of that next step is pretty cool, to say the least.”

Fermi National Accelerator Laboratory is supported by the Office of Science of the US Department of Energy. The Office of Science is the single largest supporter of basic research in the physical sciences in the United States and is working to address some of the most pressing challenges of our time. For more information, please visit science.energy.gov.